Do you dare to challenge the exciting water amusement facilities?

Whenever I see the promotional video of the changlong park, I believe that many fans will be eager to try various projects. seeing the tourists having such a fun, exciting and interesting water amusement facilities , they are very excited before they start, but when they arrive in the park after that, he was discouraged from all kinds of towering facilities. In fact, if you want to truly experience the feeling of joy, you must be brave to try. In the hot summer, if you want to relax your body and mind, of course, you have to go to the water park to challenge yourself .Fifteen water amusement facilities have been specially selected for you. The level of excitement is up and down. It is cool and refreshing while the high is overturned. How long will it take you to challenge these 15 projects? 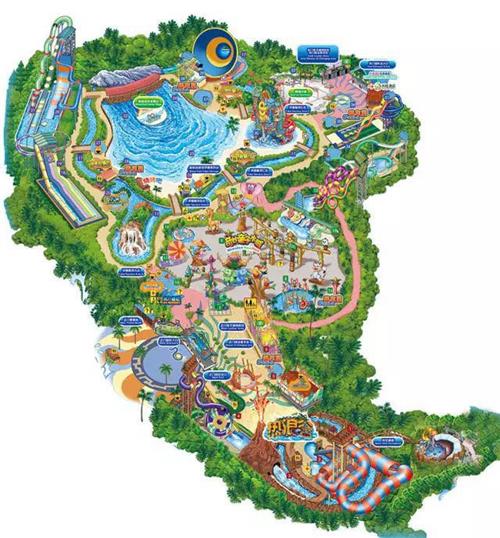 Can’t wait to start after reading the route? Then follow the pace of the editor to start the challenge!

When entering the park, it is easy for everyone to focus on the large area to the left of the entrance, but in fact, there are star projects commonly known as the “big three” on the right hand side after entering the park: Giant beast bowl, giant python and giant hongxia. Not only is the project fun here, but there are also relatively few people in line, so I suggest you change your swimsuit and conquer the big three first.

The giant beast Bowl, which is closest to the entrance, is also one of the most exciting projects in the park. At the beginning, it felt very stable and nothing special, but suddenly it was like being sucked into a huge black hole. The intense pleasure of experiencing the highly simulated deep-sea vortex in an instant is really indescribable!

Can simulate the impact of the flood in the gorge. It will prompt every 15 minutes or so that a wave of waves that is as strong as the Hawaiian valley is about to hit. If you want to close the outlet of the flood place to stay, staff members will stop you, because really, too fast!

After fully experiencing the charm of the Big Three, you can go to the largest main part of the park and fully enjoy the fun of other projects! Next, I will introduce the project in the order of the route. Wonderful parent-child water city parent-child water city is a new work of the park in 2016. In addition to the cute cartoon dream water spray equipment, there is also the super warm water system attached to the parent-child water city, which is the favorite of children. Let the parents do not miss this child the child can safely and happily swimming in a good place, where children and multi-point interactive, allowing each other’s hearts closer together. Drifting river rapid drifting area

The lazy river winds around the entire water park. It is currently the longest lazy river in the world. You can watch six major water landscapes along the way. When passing through the Ice age tunnel, the cold water droplets dripping from the top of the cave almost make people really feel like you are. Back to the ice age.

The centrifugal slide has a 110-meter-long pipe. You can fully feel the pleasure of centrifugal force along the way, and it is also a double floating ring. It feels like it is tailor-made for couples!

Do not look down upon ejection chute, but people took the gold medal of the International. The best water project to promote the use of high-tech electromagnetic water jet, making rapid progress in the floating ring up and down the chute, no wonder it is called the “water roller coaster”! Although the

Project is not as famous as the big speakers, it is actually the most exciting project in the entire park, not one of them! The three different slides each have their own thrills. The nearly vertical height and the open-air slide really test people’s psychological endurance. The editor has seen several boys climb up the stairs with great difficulty, but they come down again when they dare not play. There are a variety of slides and activities for different ages in.

Hawaii Watertown, which is more suitable for families to play.

Big speakers are almost the most popular item in the park. The queues are generally the longest, but the queues are really worth it! The four-person floating circle set off from a platform that was taller than a six-story building. It was like being slipped by a tornado and sucked into a super loud horn, screaming that it almost broke the throat! The floating circle is a bit heavy, so it’s best to ask a hunk to help lift it to the starting point.

After playing the above projects, I arrived at the world’s largest wave pool at around 2pm. The highly simulated waves make people feel like they are on the beach! A lot of beautiful and handsome guys will play in the water here. How can you be alone while feasting your eyes ? Of course, you have to pull all your friends into the water haha.

This project requires a group of 6 people, so it is usually a group trip. Everyone quickly slides from the highest point to the bottom together, and then slides up to the almost vertical slide with huge inertia. It’s super exciting!

Is also a trip of 6 people, and everyone experiences three exciting ups and downs together, which is suitable for the whole family to play together. Friends who dare not play the vertical limit on the galloping track, don’t miss this race track. Although this height is not easy, the closed pipe design in the front half is obviously more user-friendly. And relying on skateboards can add courage . Pull your good friends into the water and feel the speed with your body! By the way, you can slide farther than anyone else, but don’t think it’s easy.

Here are the top water trapeze performance team from France and the fire dance performance from Russia waiting for you, as well as the four major industry gold medal djs and mcs to help the scene, staged the smashing “Gathering of dj” night, “in which the audience with water high in the particular experience of the explosion can only be felt in a long long water park.